Whatever happened to Tart Cards?

Tart Cards? What would they be??

The 1980s was such a great decade! In the early 80s and even the mid 80s, most people didn’t have a mobile phone. So, when you left your house, that was it. Nobody was ever going to get hold of you while you were out. I can tell you, its was GREAT. Unless, of course, you decided to go to a good old British phone box to make a call, and let people know where you were. Yes, you got it, those typical British red phone boxes that are known all over the world. With their heavy door, weighty red metal framework and thick glass panels, red phone boxes were everywhere.

Phone boxes were not only great to make calls, but also to shelter you from the rain. But also, if you wanted sex, they were a great place to visit!

Pretty much every time you went into a phone box in a big town or city at any time during the 1980s, you could be sure that you would come across tart cards. And the fact is, that tart cards helped to keep many sex workers in a job.

In the mid-1980s In London, phone boxes had a few, sometimes even hundreds of different tart cards offering different sexual services. If for example you went to the phone booth at the top of Tottenham Court Road, you were in prime territory, with Soho just around the corner. Cards would be stuck to the wall of the phone box there with Blu-tak or chewing gum, they were spread all over the top of the box-style metal phone itself in a layer that was several millimetres thick. They would be wedged anywhere possible between the red metal and the thick glass of the phone box. And, frequently, they would be all over the floor of the phone box as well. 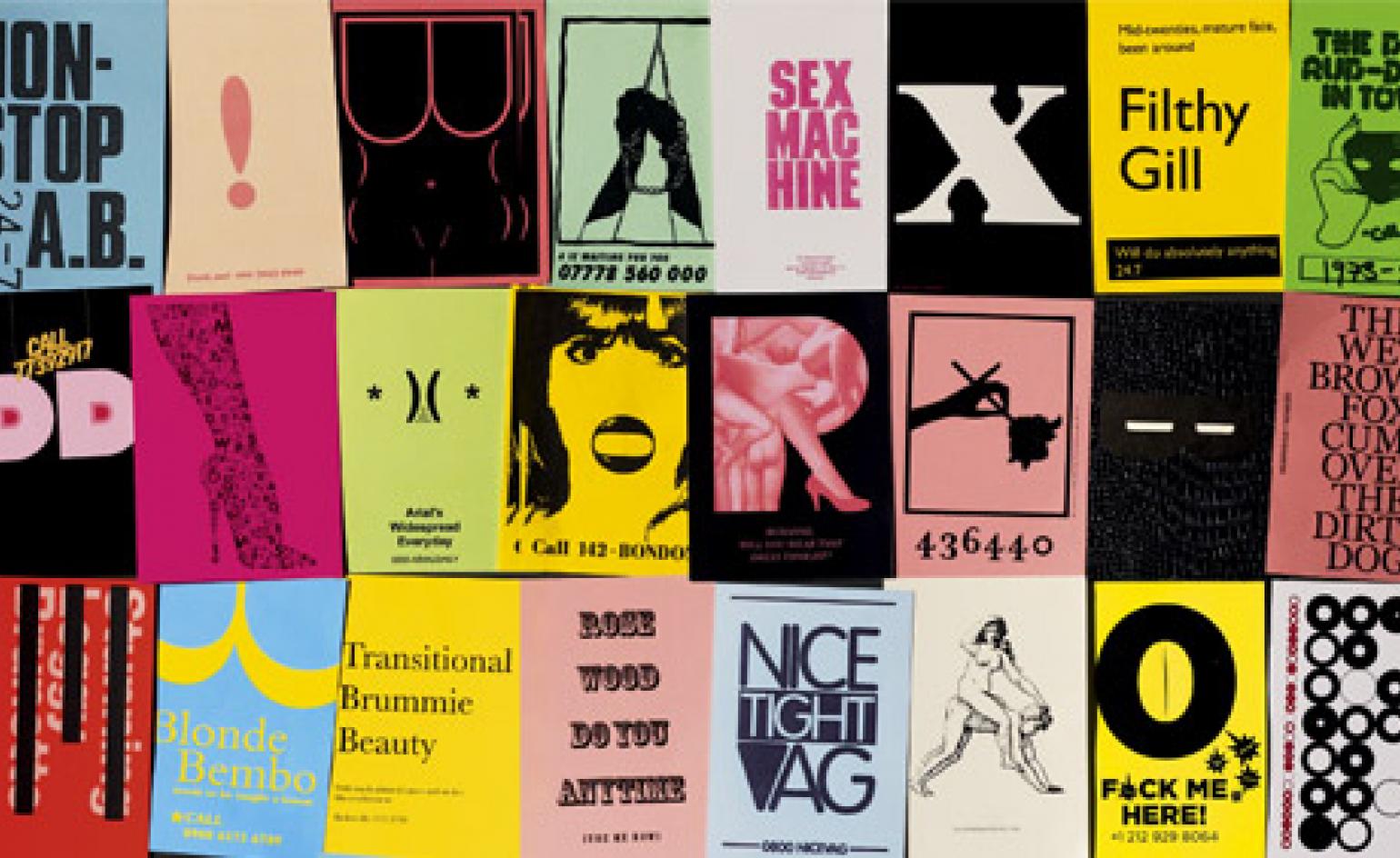 At times, BT engineers would came along to empty the phones or give them a service. At the same time, they would give the phone boxes a clear out. But 5 minutes later, the cards would be back again.

I can remember seeing this happen at the phone box at the top of Tottenham Court Road. It must have been around 1984, because I remember I had blue hair then. The BT Guy came out of the phonebox and chucked a huge pile of cards into the bin next to it. Then he got into his van. No sooner had he left, then a tall, slight, young guy wearing an anorak with his hood up, and carrying an army surplus shoulder bag ( how appropriate!) appeared from under a shady doorway and started putting the cards back into the phone box. Out of curiosity after he left, I opened the door of the phone box to look inside. He had done a grand job. But what was interesting was that he had posted tart cards of many different colours and containing many different services and phone numbers. So, I wondered if he had got himself a job as a promoter for several different clients, possibly in the same area. A question I will never know the answer to!

Anyone that still has one of these tart cards in a secret collection, should surely hang onto it for posterity! In future, these cards may also have a certain value. Sex workers were often pretty creative with their artwork, a simple description of their services and a phone number and/or address where to find them. 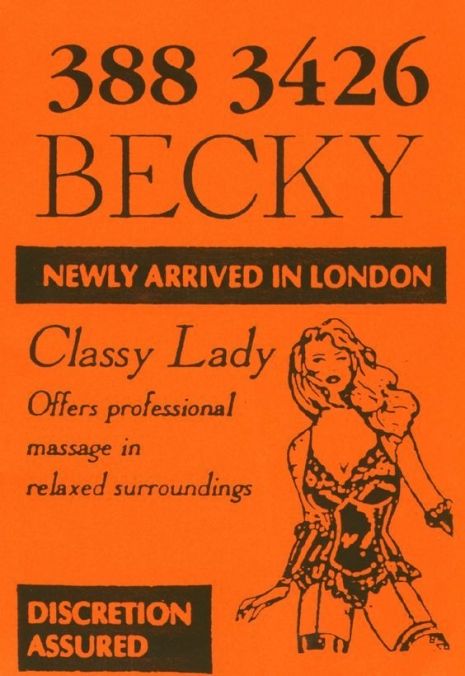 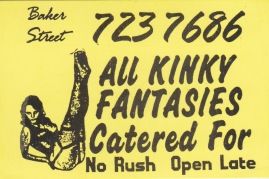 Wording such as “Strict Mistress offers correction,” “Hot American Blonde available, home visits possible,” “TV Transformations- Full Beauty Salon” were used simply to explain the services. In some cases, we noted there would be a multitude of different and varied services, but all with the same phone number, printed onto different cards in the same phone box.

These cards were perfect for sex workers offering specialist services such as Domination, spanking, and catering for those with unusual tastes which were hard to satisfy.

Later the cards became more durable and were printed on thicker cards. The artwork was better too. Dr Lister points out that the artwork on the cards rarely resembled the actual sex worker. We can only imagine some of disappointments people had after walking the streets of London, mounting some dark stairs in Soho and being faced with somebody that looked nothing like the promising, curvy figure printed on their tart card! 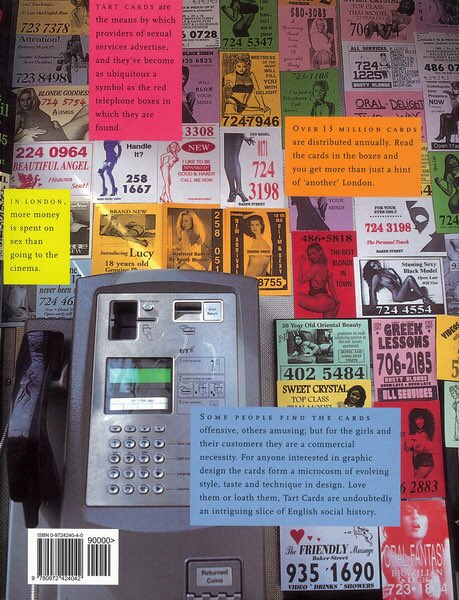 Once 0898 became established, the practice of placing 0898 number is cards in phone boxes was frowned upon. Dr Lister explains that often, “the cards offered sex workers a basic form of client screening. The only contact detail provided was a phone number, which the client would call to discuss what they wanted, as well as arranging a time and place. The provider would only give out an address once they had established that this was someone they wanted to see.” Some other cards did contain addresses, but this was, for obvious reasons a rather risky business.

By this time, many of the red phone boxes had been replaced by newer models, but the cards continued in proliferation, well into the 1990s.

THE END OF TART CARDS

By the 1990s, mobile phones had become more common place. Phone boxes began to go out of fashion. One by one, they slowly started disappearing. The internet also developed at a rate of knots. The men’s magazines were now filled with sexual services that one could have alone, from the privacy of one’s own home, via the phone. Soon, British punters could have a live sex call whenever they wanted one too.

Dr Lister brings the story of the tart card to a suitable end for us. “ In 2001, tart cards had become such a nuisance in the UK that the Criminal Justice and Police Act made placing them in phone boxes punishable by six months in prison or a fine of up to £5,000. You can still find the odd card here and there, but as the mobile phone has rendered the phone box redundant, and the internet has created a far safer way for sex workers to advertise to clients, the humble tart card has had its day.”